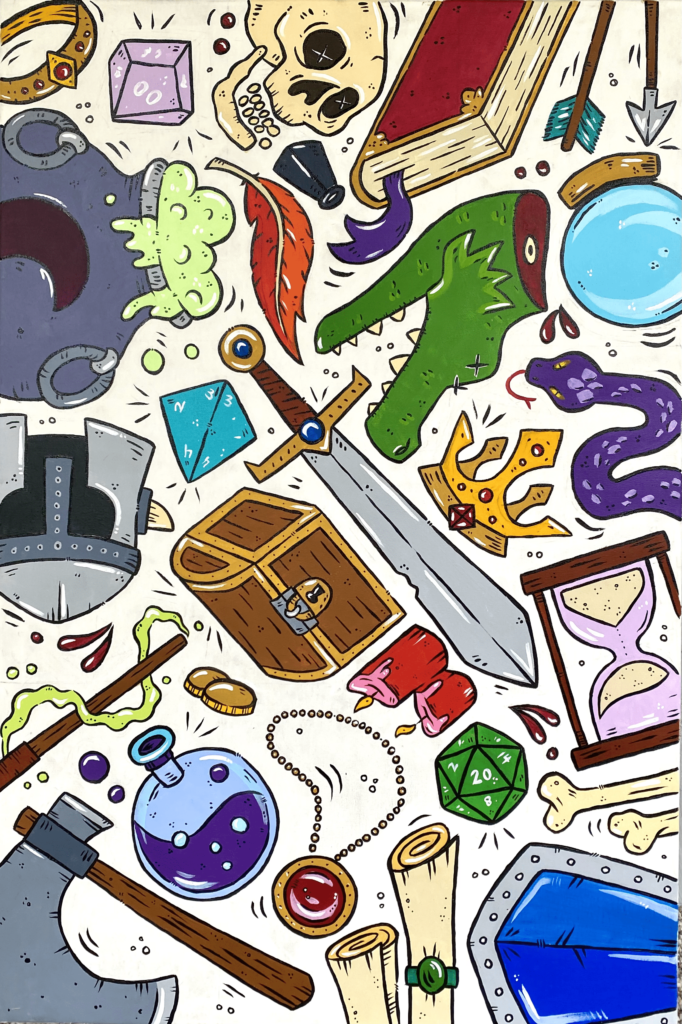 This is a 36” tall and 24” wide white canvas filled with a series of cartoon-style doodles. The background has been left so that the bare, white canvas shows through. The doodles fill the entirety of the canvas, with some going off the edge. There is white space left between them. Each of the doodles is made up largely of solid colors, to which thick black outlines and white highlight marks have been added. From top right, clockwise, the featured images are: A red and gold spellbook with a purple bookmark, two ends of an arrow whose feathers are teal, a blue crystal ball, a green severed dragon head with crossed out eyes, a purple snake, a gold crown with red jewels, a purple and brown hourglass, two bones, a green 20-sided die, a blue gemstone amulet, two scrolls with a green seal, a red circular pendant attached to a chain, two red and pink candles, a throwing ax, a round-bottom boiling flask filled with purple liquid, two gold coins, a magic wand surrounded by green smoke, a metal helmet with a horn protruding from one side, a pyramid-shaped dice, a treasure chest with a lock, a large sword in the center of the piece, a gray cauldron with lime-green froth at the top, a red and orange feather, a black bottle, a skull, a purple dice, and a golden ring with red gems. Around each of the items flicks and tiny circles have been added suggesting movement or emphasis.